The following piece is written by Jenna Blakeman, a senior at the University of Arkansas double majoring in Political Science and African and African American Studies. An Arkansas native, Jenna is interested in stories that intersect issues of race, class, gender and citizenship in the South.

HB1231, sponsored by Rep Mark Lowery (below), is cited as the “Saving American History Act of 2021.” It’s closely based on legislation Senator Tom Cotton  introduced to the U.S Senate in July of 2020.

What You Need to Know About HB1231

The 1619 Project , an initiative from the New York Times Magazine, examines the legacy of American slavery. The 1619 Project challenges the year 1776 as the origin of the United States, referring to the affirmation of the Declaration of Independence. Instead, the project situates the year 1619 as the country’s birth year, an acknowledgement of the first ship of enslaved Africans to arrive on the coast of the British colony of Virginia.

HB1231 states that, “the true date of founding of the United States of America is July 4, 1776.” In its entirety, HB1231 claims that the history of the United States was founded on the principles of the Declaration of Independence, not slavery or oppression. When asked to comment on the bill in an interview, Lowery said, “looking at a theoretical perspective like The 1619 Project, or even looking at using critical race theory as a prism for looking back at history, is not factual and it would be banned by these bills.”

What Constitutes History Worthy Being Taught?

The bill purports to act in the interest of “forming young people into knowledgeable and patriotic citizens.” There is a fatal flaw in the bill’s attempt to empower young people to be engaged citizens: revisioning the history of the United States under terms that are more convenient for our own self-interests prevent us from understanding the evils of slavery, genocide, and oppression that our nation was founded on—and, thus—being able to recognize the lasting effects it has on our country today. The bill supports a false-choice narrative in which patriotism and critical thinking are mutually-exclusive; yet, protecting the freedom of thought is necessary for a functioning democracy.

State Senator, Joyce Elliott [D-Little Rock] publicly opposed the bill in a tweet that read, “And now there is this, Part II. Explicitly about the 1619 Project. Prepare to have the Arkansas legislature define what constitutes history worthy of being taught. Because…why not???  They know best. No?” 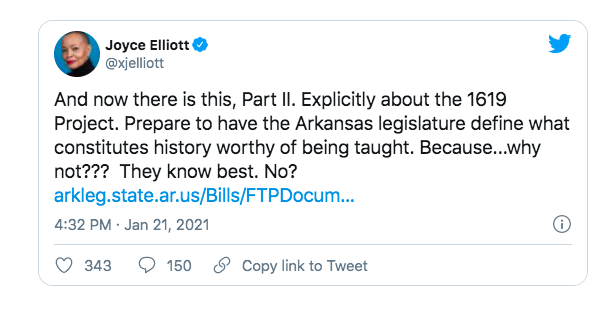 Not only is HB1231 laden with hegemonic, white configurations of power— not only is it an example of oppressive white revisionist history— but it’s simply unhelpful to the people of Arkansas, whose state’s history is rich in a tradition of Black Americans fighting to make the false promises of the Declaration of Independence realized for those who have been denied of their basic liberties.

No Aspect of Arkansas History is Racially Innocent

When Black sharecroppers in Elaine, Arkansas formed a chapter of the Progressive Farmers and Household Union of America in 1919 in response to white planters’ economic exploitation, mobs of white vigilantes drummed up a racialized backlash, killing at least 200 Black people, though some scholars believe the number is closer to 800. In her pamphlet, “The Arkansas Race Riot”, Ida B. Wells wrote, “hundreds of white men were chasing down and murdering every Negro they could find, driving them from their homes and stalking them in the woods and fields as men hunt wild beasts.”

Arkansas’s gruesome history of racial violence and white supremacy haunts the living, breathing souls of Arkansans today. Obfuscating the principles of which this country was founded on by diminishing the role of slavery on the country’s origins denies Arkansans of the opportunity to better understand their past—and, thus—imagine new possibilities and solutions for their futures— all of their futures. Arkansas would be better suited to address problems including, but not limited to: food insecurity, child poverty, and housing if it encouraged Arkansans to take ownership of all of their democracy, not just part of it—and especially its contradictions.

The 1619 Project Curriculum is a resource developed by the Pulitzer Center that offers free lessons and materials to educators teaching The 1619 Project in their classrooms. The state of Arkansas is a local-control state, meaning decisions about curriculum choices are made by school districts. The Arkansas Department of Education is not able to determine whether the 1619 Project curriculum is being used—and to what degree—in Arkansas public schools.

To be sure, the decision to control what curriculum is permissible—and to whom—is not a neutral one; rather, HB1231 dilutes the fundamental, historical truths of the United States of America—the access to which is necessary for building a state government that works for all of us. Subverting local control of public schools further prevents young people from taking ownership of their democracy by eliminating a clear path for community members to hold those in positions of power accountable.

The Legacy of Arkansas’s Education Crisis

The introduction of HB1231 is a part of a larger struggle in Arkansas—what author Milan Kundera describes as, “the struggle of man against power is the struggle of memory against forgetting.” President Eisenhower deployed federal troops to Little Rock, Arkansas in 1957 to insure the promise of school integration upheld by the Supreme Court in Brown v. Board of Education (1954). It was the first time federal troops occupied a southern state since the end of Reconstruction. During the recent state-takeover of the Little Rock School District, public schools that received an “F” grade on performance standards were placed under the jurisdiction of the state, while passing schools remained under the control of a newly elected local school board. The delineation of passing and failing schools was configured across racial lines, placing schools with a majority-Black population under state control.

It seems obvious, then, that our past, no matter how hard we try to negotiate with its terms and conditions, is actively defining our future. Whether we choose a future that works for all of us depends on our ability to keep the history of the United States and its reliance on slavery alive against the incentives to promote a narrative of the past that advances an oversimplified and wholly inaccurate version of ourselves.